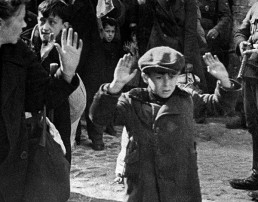 Children of Gemeinschaftsfremden (lit.: strangers to the community, those people who were not considered to be part of the Volksgemeinschaft) were marginalized and persecuted in the Nazi state. The National Socialists killed thousands of disabled boys and girls in euthanasia institutions. 1.5 million Jewish children and teenagers as well as an unknown number of young Sinti and Roma perished. They died in ghettos and camps as a result of hunger, violence and forced labor, were shot by death squads or suffocated in gas chambers.
Many children from the Soviet Union and Poland were brought to Germany, sometimes with their parents, for forced labor. The minimum age for foreign civilian workers was lowered further and further during the war. Tens of thousands of babies born to foreign forced laborers died in German custody.
Young people in Germany also had to reckon with persecution if they managed to evade the total grip of the state. Tens of thousands were sent to youth concentration camps after having been classified as members of oppositional youth groups or as “difficult.” 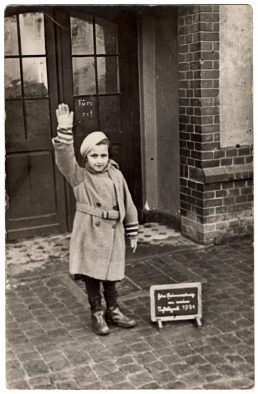 9-year-old Jewish schoolgirl Alice Rosenthal was forced to pose giving the Hitler salute for her school photo in Wiesbaden, 1934.

After the handover of power to the National Socialists in 1933, Jewish students were still allowed to attend public schools. After the pogroms in November 1938, they were forbidden to do so. 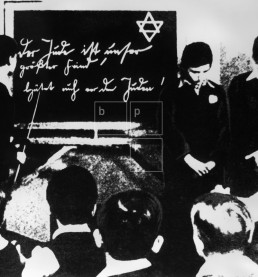 Humiliation of Jewish boys in front of their non-Jewish classmates in a Viennese school, 1938.

On the blackboard is written: “The Jew is our greatest enemy! – Beware of the Jew!” Beginning in 1938, Jewish children were no longer allowed to attend public schools in the German Reich, which included Austria.

Men of the SS lead away Jewish women and children after the suppression of the Warsaw Ghetto Uprising, May 16, 1943.

Presumably, almost none of the people taken away survived. It was long believed that the boy with his hands up was Zvi Nussbaum (1935-2012), a survivor of the Bergen-Belsen Concentration Camp. Recent research suggests that may not be the case. 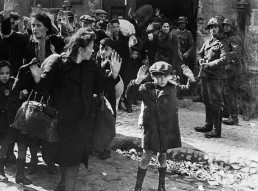 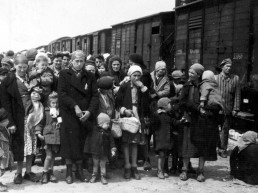 Arrival of a transport train at the ramp of the Auschwitz-Birkenau Concentration Camp, May 1944.

In 1944, the SS deported over 400,000 Jews from Hungary to Auschwitz, including many children. At the train ramp, SS doctors deemed most of the children unfit for work and sent them to the gas chambers. Some managed to pass themselves off as older to avoid certain immediate death. Several thousand children were transferred to other concentration camps, including Buchenwald and Mittelbau-Dora.

The photo is from an SS album. 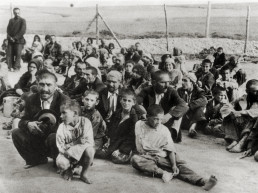 In the spring of 1940, Sinti and Roma who had been deported from the German Reich were imprisoned in the camp in occupied Poland. They were transferred to another camp in May 1940. Later, the SS used the Bełżec site as an extermination camp for Jews. 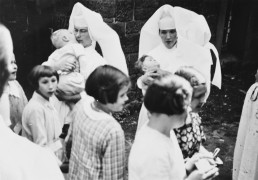 Removal of children from the Antonius children’s home in Fulda, 21 July 1937.

43 children with disabilities were moved to a home in Treysa (Hesse). About half of them were later murdered in the Hadamar euthanasia institute. The other children survived thanks to a nurse’s rescue efforts. 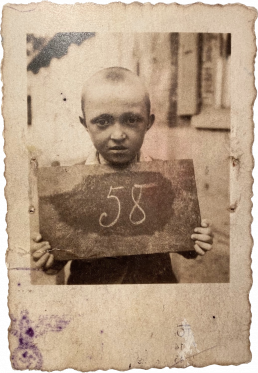 The 7-year-old Polish boy was a forced laborer on a farm near Aachen. In total, nearly one million foreign children and teenagers were brought into the German Reich as forced laborers. 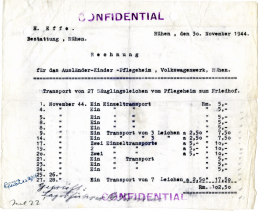 Invoice for the transport of infant corpses, 30 November 1944.

The children born to foreign forced laborers died in a “foreign children’s care institution” run by the Volkswagen plant. In total, several ten-thousands of foreign children starved to death in such homes between 1943 and 1945. This document from Rühen, near Wolfsberg, served as evidence in a British war crimes trial. 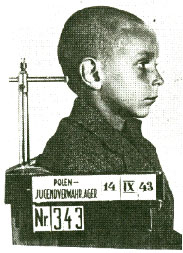 ID photo of an unknown boy in the Kinder KZ Litzmannstadt (Łódź), November 1943.

Between 1942 and 1945, more than 10,000 Polish children and teenagers up to the age of 16 were imprisoned in this camp in annexed western Poland. They had been arrested as relatives of resistance fighters, for neglect or theft of food. There were concentration camps for German children in Moringen and in Ravensbrück.

"All ringleaders [...] are to be sent to a concentration camp. There the young people must first of all be beaten and then be drilled harshly and made to work [...] The stay in the concentration camp for these youth must be a longer one, 2-3 years. It must be clear that they will never be allowed to attend university again [...] Only if we take brutal action will we be able to avoid the dangerous spread of this Anglophile tendency at a time when Germany is fighting for its existence [...] I ask that this action be carried out in agreement with the Gauleiters and the Higher SS and police leaders.
Heil Hitler Ihr H. H."

The Swing Kids were an oppositional youth movement represented in many major German cities. Swing did not conform to the ideas of National Socialist ideology and was considered degenerate music. SS chief Heinrich Himmler called for a police crackdown and for the young people to be sent to concentration camps. 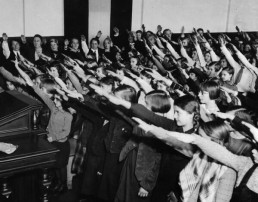 Nazi propaganda persuaded the children of the Volksgenossen that they were part of a superior Volksgemeinschaft (national community), giving them the feeling that they belonged to a…

Children of Gemeinschaftsfremden (lit.: strangers to the community, those people who were not considered to be part of the Volksgemeinschaft) were marginalized and persecuted in the Nazi…

Nazi propaganda persuaded the children of the Volksgenossen that they were part of a superior Volksgemeinschaft (national community), giving them the feeling that they belonged to a Herrenrasse. Many young people readily accepted this idea.
National Socialism permeated the lives of children and young people, from the family to school to the Hitler-Jugend (Hitler Youth, abbreviated HJ), the youth organization in which almost all young Germans were involved. They were indoctrinated in the cult of the Führer, soldierly virtues, an ethno-nationalist worldview, and the cult of a healthy body. 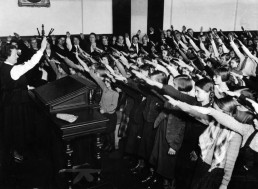 School in the National Socialist era. Celebration in a Berlin elementary school on the anniversary of the founding of the German Reich in 1871, January 18, 1934.

In 1934 the Hitler salute became mandatory in German schools. National Socialist-influenced curricula and textbooks, especially in the subjects of history and biology, taught “racial studies.” As early as 1933, many teachers were already members of the Nazi Party and urged their students to join the Hitler Youth. 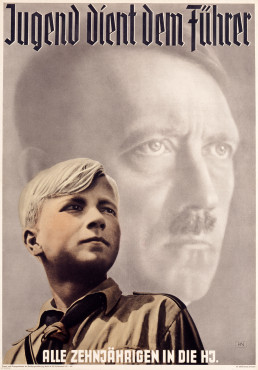 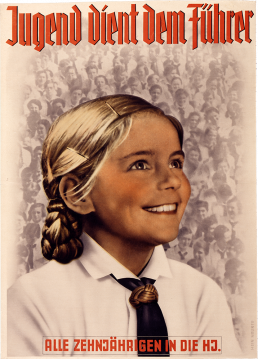 Indoctrination and the Cult of the Führer: advertising posters designed by the Press and Propaganda Office of the Reich Youth Leadership, c. 1939.

In 1936, the HJ was declared the sole state youth organization, and from 1939 onward membership was compulsory for German children and teenagers. But even before that, many had already joined voluntarily. The HJ was the Nazi Party’s youth organization and a state educational institution at the same time. It indoctrinated its members to absolute obedience and devotion to Hitler and the Volksgemeinschaft.

"Your body belongs to the nation": athletics pageant at the HJ sports festival in Essen, 1938.

Sports and military training played a central role in the education of children and young people. They were called upon to be constantly ready to perform. At the same time, sports was a means of fostering ideological indoctrination and preparation for war. 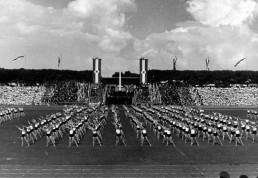 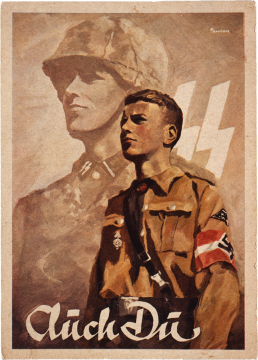 From the HJ to the SS: Waffen-SS propaganda postcard, Vienna, c. 1943.

The HJ was not only an organization for ideological indoctrination, it also provided military training. The quasi-military camps with marching drills and combat and weapons training were intended to prepare the boys in the HJ for their deployment in the war. 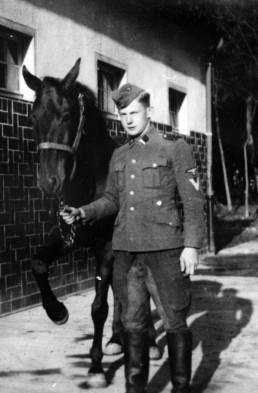 Many concentration camp guards were not yet of age. Hans Stark, an enthusiastic Hitler Youth, joined the SS at a very early age. At only 16, he was assigned to the guard detail at Oranienburg Concentration Camp and was transferred to Buchenwald Concentration Camp in 1938. There he looked after the horses of a cavalry platoon, but was also deployed for guard duty. Later, Hans Stark was among the SS troops deployed to the Dachau and Auschwitz Concentration Camps. In the Frankfurt Auschwitz trial, the court found him guilty of having been complicit in murder and sentenced him to 10 years in juvenile detention. He died in 1991.

The HJ patrols imitated the acts of persecution committed by the SA and SS. Children and young people who were seen as enemies could expect to be beaten up in the streets. During the war, the HJ patrols were also used as auxiliary police, to guard forced laborers, for example. 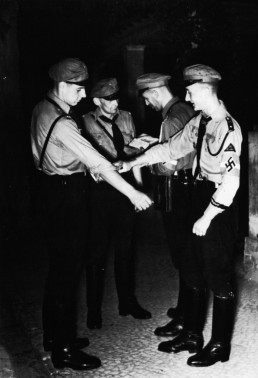 "They were a bunch of thugs," says Werner Freund in an interview about his encounters with the Hitler Youth, 2010.

Jugend führt Jugend (the young leading the young) was the propagandistic motto for the HJ program that trained its members to become HJ leaders. During World War II, the Wehrmacht (the German armed forces) drafted many older HJ members for military service. In many cases, inexperienced younger boys took over the leadership positions. Membership in the HJ, especially in the Jungvolk (the HJ division for boys 10-14), thus became less attractive than before. 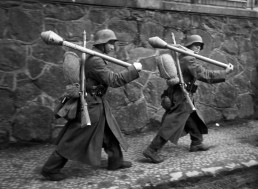 From the Hitler Youth to the Front: Young people armed with bazookas and carbines march to war in Lower Silesia, March 30, 1945.

In March 1945, compulsory military service was extended to those born in 1929. This meant that even 15-year-olds had to join the Wehrmacht, the Waffen-SS or the Volkssturm. Many of the boys sent to the front were untrained.

The boy was part of a unit of 60 heavily armed Hitler Youth who were taken prisoner by US troops near Martinszell in Allgäu. 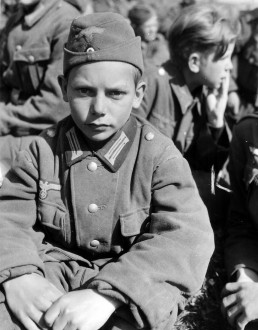 Nazi propaganda persuaded the children of the Volksgenossen that they were part of a superior Volksgemeinschaft (national community), giving them the feeling that they belonged to a…

Children of Gemeinschaftsfremden (lit.: strangers to the community, those people who were not considered to be part of the Volksgemeinschaft) were marginalized and persecuted in the Nazi…