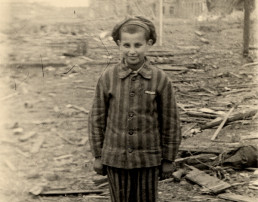 The evacuation of the “gypsy family camp” in Auschwitz-Birkenau began in April 1944. By August, the SS had transferred about 1500 male Sinti and Roma to the Mittelbau-Dora Concentration Camp. Among them were many teenagers and even some children. Almost all of them were taken to the subcamps Ellrich-Juliushütte and Harzungen, where, like the adults, they were assigned to exhausting forced labor on construction sites.

In June 1944, the SS deported 1000 Hungarian Jews from Auschwitz to the Harz Mountains. More than a third of them were not yet adults, with the youngest only 12 years old. The SS took most of them to the notorious Ellrich-Juliushütte subcamp. In November 1944, there were 260 Hungarian-Jewish children and adolescents in the camp.

The number of young Jewish prisoners in the Mittelbau camps further increased after January 1945, when evacuation transports from Auschwitz began to arrive. The youngest prisoner was Herbert Noah. He was born in the railway wagon used to transport the prisoners two days before it arrived in Dora. His further fate is not known. 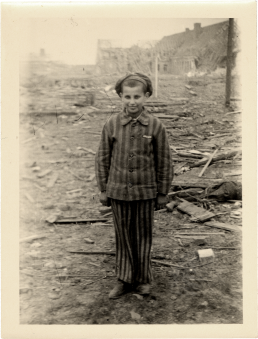 Liberated child in the Boelcke garrison in Nordhausen, mid-April 1945.

In January 1945, the SS began using the garrison as a subcamp of the Mittelbau-Dora Concentration Camp for prisoners who were not fit for work. It was here that the SS brought many of the utterly exhausted prisoners who arrived in January and February 1945 on evacuation transports from Auschwitz and Groß-Rosen.

Leo Spiegel was a Hungarian Jew who was transferred from Auschwitz to Buchenwald and from there to Dora in May 1944, when he was 14 years old. In July 1944, the SS took him to the Ellrich-Juliushütte subcamp, where he was a forced laborer on construction sites. 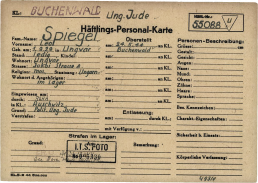 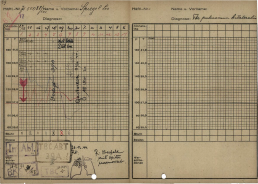 On 24 December 1944, Leo Spiegel was transferred from Ellrich to the infirmary at the Dora camp. There he was placed in Block 39 A, the tuberculosis ward. He died of pulmonary tuberculosis at the age of 15 on 31 December 1944.

Sandor Kaufmann, a Hungarian Jew, was transferred from Auschwitz via Buchenwald to Dora in May 1944 at the age of only 12. There he was a forced laborer in the underground rocket factory. He died in the infirmary on 6 February 1945. Sandor Kaufmann is the second-youngest documented fatality at the Mittelbau-Dora Concentration Camp. 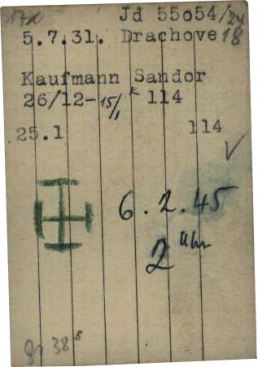 "My cousin, he was also there, he was also Sinto. And he was the foreman there, so to speak, and he always said to me: 'Franz, you stay with me, I'll take care of you.' And he was all right."

The SS deported the Sinto Franz Rosenbach (1927-2012) from Auschwitz via Buchenwald to Mittelbau-Dora in April 1944, when he was 16. Many Sinti and Roma were taken as family groups to the concentration camps. The help of his cousin, who was a prisoner functionary, saved Franz Rosenbach.

Excerpt from the notes of survivor Alex Hacker, 10 February 1945.

Alex Hacker, an 18-year-old Jew, was deported from Hungary to Mittelbau-Dora at the end of 1944. He kept a diary while in the camp. He prepared one page so that he could write the date of his return to his parents after liberation.

Translation: “And down here I will write the date when I will see my dear and beloved mother and father again in good health.” 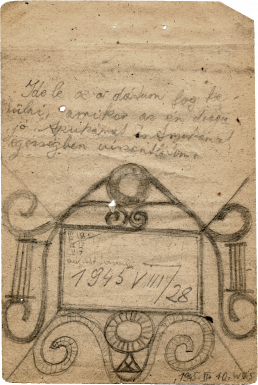 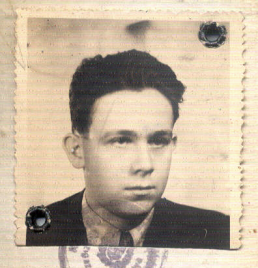 In April 1945, Alex Hacker arrived at the Bergen-Belsen Concentration Camp on an evacuation transport. There he was liberated by British troops. In the summer of 1945, he was reunited with his parents in Budapest. 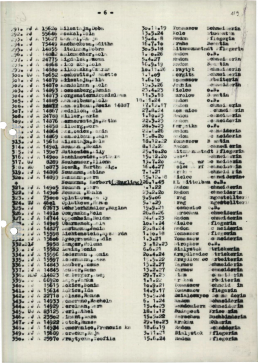 Transport list of an evacuation transport with 512 women from Auschwitz to Mittelbau-Dora, 28 January 1945. 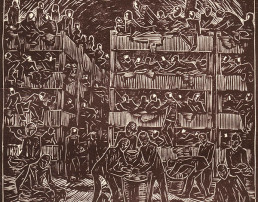 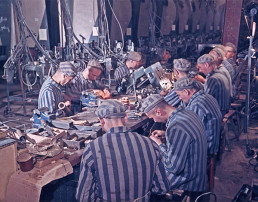 After a British air raid on the Peenemünde Army Station, the Ministry of Armaments moved the assembly of A4/V2 rockets to a tunnel facility near Nordhausen. Concentration camp prisoners were to carry out both the expansion of the tunnels and the rocket assembly.

On 27 August 1943, the first prisoners from the Buchenwald Concentration Camp arrived at the Dora subcamp to build the armament plant. Beginning in the spring of 1944, the SS used them for other construction projects in the region. In the fall of 1944, the complex became an independent facility, the Mittelbau Concentration Camp. Dora was its main site.

One in three of the more than 60,000 prisoners lost their lives in the camp complex. Most died of hunger and disease, from work accidents and exhaustion. But executions were also part of the prisoners’ daily lives. On 11 April 1945, American troops liberated the Mittelbau-Dora Concentration Camp. They found catastrophic conditions and only a few survivors, including some children and young people. 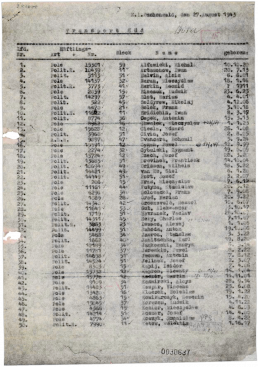 First page of the transport list from Buchenwald to the Dora subcamp, 27 August 1943.

107 prisoners, including some adolescents, were on the first transport to the Dora subcamp. By Christmas 1943, further transports had increased the number of prisoners to over 10,000. Only a few of the prisoners were German. They were generally assigned to be prisoner functionaries, and had a more privileged status than their fellow prisoners, but they were also dependent on the favor of the SS. The greater part of the prisoners, most of whom were designated as political prisoners, were sent to Dora by the SS from the Soviet Union, Poland, France, and other occupied territories. 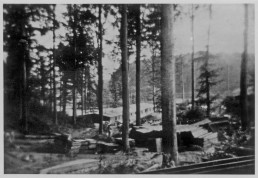 View of the barracks under construction, summer 1944.

The actual camp at Dora did not yet exist when the prisoners arrived in the fall and winter of 1943/44. The prisoners were housed underground. By the summer of 1944, barracks had been built, housing an average of 15,000 people. A prisoner secretly photographed the construction of the camp.

View from the north over the Dora barracks, with the town of Nordhausen in the background, April 1945 (after liberation). 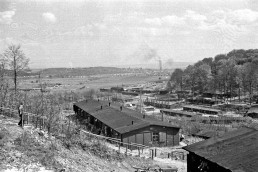 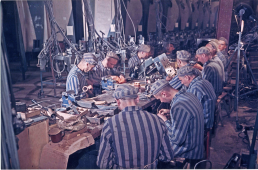 After the underground rocket plant was completed, some of the prisoners were sent to work in the rocket assembly. Since this work required trained skilled workers, the SS used only a few young people here. The photo was commissioned by the Ministry of Armaments. Work in the concentration camp was to be portrayed as exemplary, any sign of misery was hidden. 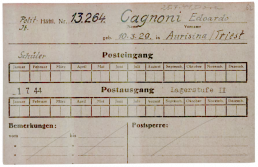 The 15-year-old student from Aurisina near Trieste (Italy) was arrested by the German Security Police in his hometown on 15 June 1944, and shortly thereafter sent to the Buchenwald Concentration Camp as a political prisoner with the designation Lagerstufe 2 (stricter prison conditions). On 25 July 1944, the SS transferred him to the Ellrich-Juliushütte subcamp of the Mittelbau-Dora Concentration Camp. There he had to perform emaciating forced labor at underground construction sites and died on 18 November 1944.

Information on the subcamps of the Mittelbau-Dora Concentration Camp:
aussenlager.dora.de

In the first months, the prisoners were not housed in barracks, but underground in sleeping chambers. Thousands fell victim to the catastrophic hygienic conditions in the tunnel and the exhausting forced labor. 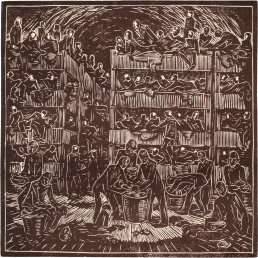 Dominik Černý was a Czech teacher and artist. After his liberation, he processed his impressions of the conditions in the tunnels in a series of woodcuts. They express the confinement, darkness, hygienic conditions, and the death of his fellow prisoners.

Testimony on forced labor in the tunnels: Franz Rosenbach in an interview with the USC Shoah Foundation, October 1998.

Franz Rosenbach, a Sinto who was 16 years old when he was sent to Dora from Auschwitz-Birkenau via Buchenwald in April 1944. He was a forced laborer in the work details expanding the tunnel system. 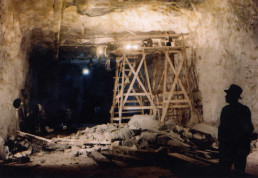 The photo was taken during the shooting of a propaganda film about the rocket program, commissioned by Armaments Minister Albert Speer.

From the tunnel into death: excerpt from the transport list from the Dora work detail to Lublin, 17 January 1944.

The SS sent those prisoners who could no longer work due to illness and exhaustion to die in the Lublin-Majdanek and Bergen-Belsen Concentration Camps. Among them were young people like the 18-year-old Jean Antoine and the 17-year-old Felix Le Bacq, numbers 13 and 24 on the list. The trails of the two French teenagers end in the Majdanek Concentration Camp. 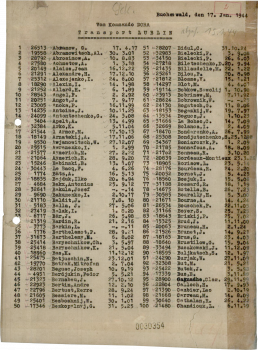 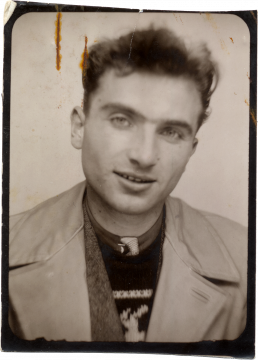 "I send for Gouju, my countryman, to come to the 'box' where I lie. He comes, and to see this friend from the good old days near me fills me with inestimable joy; this friend who will faithfully convey my last words and my last thoughts to my father. This is a consolation not had by many who, in the midst of indifferent strangers, died alone in some hut in these accursed camps."

Account by Michel Fliecx of the days before his transfer to Bergen-Belsen, 1946.

The Frenchman Michel Fliecx was a political prisoner and 19 years old when he was sent to the Dora camp in October 1943. In March 1944, the SS classified him as unfit for work and transferred him to the Bergen-Belsen Concentration Camp on an “invalid transport.” He was one of the few survivors.